The packs are wilderness rescue specific and provide Wilderness Paramedics with a range of lightweight medical equipment to treat a number of injuries typically sustained by bushwalkers.

Ambulance Tasmania Wilderness Paramedic Derek Fisher said the new packs allow him and his colleagues to be better prepared for call-outs and respond more quickly.

"Until now, Wilderness Paramedics took what they thought they would need from the ambulance, packed into their bags and began their walk to the injured bushwalker," said Mr Fisher.

"The new packs are not only equipped with everything that you would generally need for a wilderness rescue but they are lighter and more compact than the equipment previously used.

"The biggest difference is the compact defibrillator which cuts significant weight from the pack.

"Wilderness Paramedics will often assist with the evacuation of an injured or sick bushwalker when weather conditions don’t allow Westpac Rescue Helicopter Tasmania to perform a safe rescue."

"We would typically reach the injured person on foot, provide medical assitance and either get them to a location where Westpac Rescue Helicopter Tasmania can safely pick them up, or wait with them until it is safe to be lifted out."

The packs are a 70 litre backpack, weighing around 15kg, and can be broken up into smaller parts.

"The ability to take the packs apart allows wilderness paramedics to share the pack amongst other wilderness paramedics or police rescuer officers on any given rescue, which shares the load and allows members of the rescue party more capacity to carry equipment such as tents, clothes, food, and other medical equipment," said Mr Fisher.

It is the first time packs like these will be used in Tasmania. Each pack is valued at around $12,500 and have been purchased by Westpac Rescue Helicopter Tasmania. 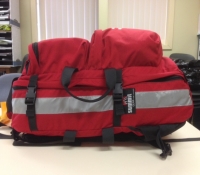 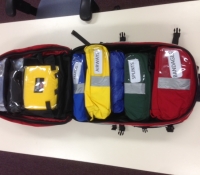