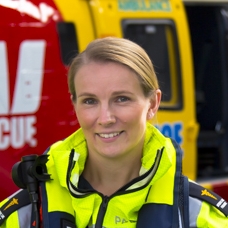 Jess grew up on a farm just north of Triabunna and her first encounter with the rescue helicopter service was when it landed on one of their paddocks to attend a car accident when she was 10 years old. She remembers thinking on that day what an awesome job it would be to work on the helicopter.

At 19 she started work as a student paramedic with Ambulance Tasmania in Devonport and transferred to Hobart in 2008 when she was qualified. As an intensive care paramedic, she began working on the Westpac Rescue Helicopter in 2013.

"My first job on the Helicopter was a bit of a baptism of fire and is a job I won't forget in a hurry. The L’Astrolabe, French Antarctic vessel, was returning to Hobart with a researcher who had become seriously ill with a medical condition. His condition had deteriorated rapidly and medical staff on the ship were concerned that he may not survive the trip to Hobart, if not transferred earlier.

I remember being both terrified and excited as we flew away from mainland Tasmania, heading south across the ocean. There was speculation during the flight that we would not be able to land on the ships helipad because of difficult sea conditions.

Myself and the Doctor that had joined us for the mission, were able to get out at a hover and assess the patient. During this time the pilot managed to land safely on the ships deck. We were able to successfully retrieve the patient and return to Hobart. This mission gave me a massive appreciation for the skills and expertise of the crew members that I work with."

Currently Jess is the only female crew member working on the Westpac Rescue Helicopter in Tasmania and she is hoping she can inspire more females to take on this very rewarding career.

Away from work, Jess and her husband have just welcomed their first child, a baby boy, into the world in March 2016 and she is excited about returning to work on the Westpac Rescue Helicopter in early 2017.

Back to All
Paramedics